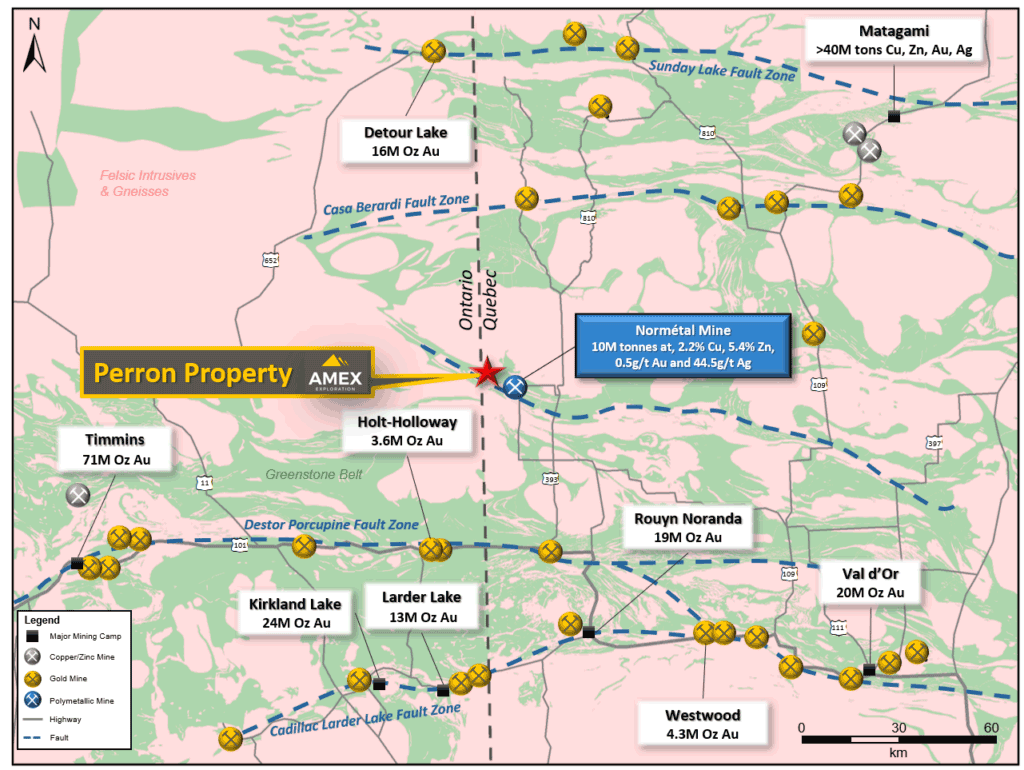 The property consists of 117 adjacent claims covering a total area of 4560 hectares and is 100%-owned by Amex Exploration. The property is located in the Archean Greenstone Belt of the Superior province. The area is crossed by the regional NW-SE trending Normétal and Perron faults. The Normétal fault is coincident with a stratigraphic horizon known to host massive sulphide deposits such as the nearby past-producing high-grade polymetallic (Cu-Zn-Au-Ag) Normétal mine and the Zn Normetmar deposit and also related to several epigenetic gold showings. The Perron fault is located about 500 to 1000 metres south of the Normétal Fault and is related to several epigenetic gold deposits and showings, including the HGZ, Denise, Grey Cat, and Gratien Zones, 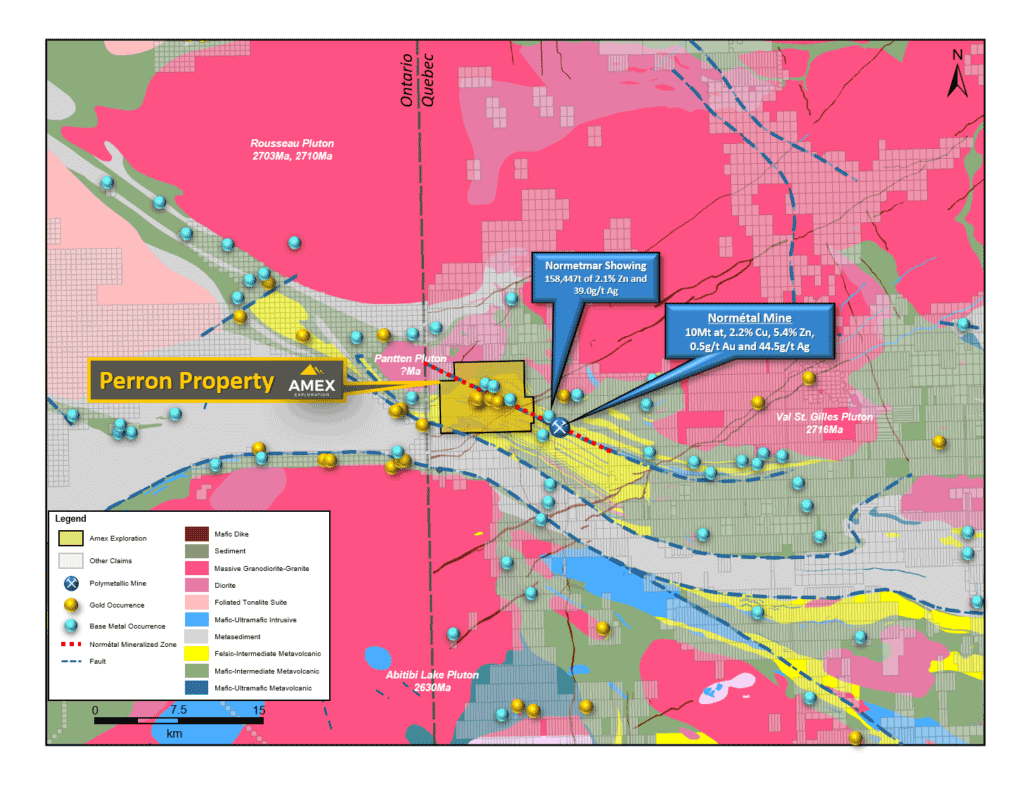 The Perron property was originally explored for base metals from 1994 to 1996 by Falconbridge Limited. Amex, formerly known as Minières Coleraine, was granted an option to acquire the property in 1996. The option agreement terms have long-since been fulfilled and Amex now owns 100% of the Project.

Since the acquisition of Perron, Amex has made a number of gold and base metal discoveries, namely the Eastern Gold Zone (which includes the High Grade Zone and the Denise Zone), the Gratien Gold Zone, the Central Polymetallic Zone, the Grey Cat Zone as well as several compelling regional drill results that warrant additional follow-up.

With the ongoing 2020-2022 drill program, Amex further defined and expanded the Denise Zone and identified exceptional high-grade gold continuity in the High-Grade Gold Zone (HGZ). To date, Amex has hit very high-grade and often visible gold in multiple zones across the project forming a corridor of gold mineralization extending over 3.5 km.. 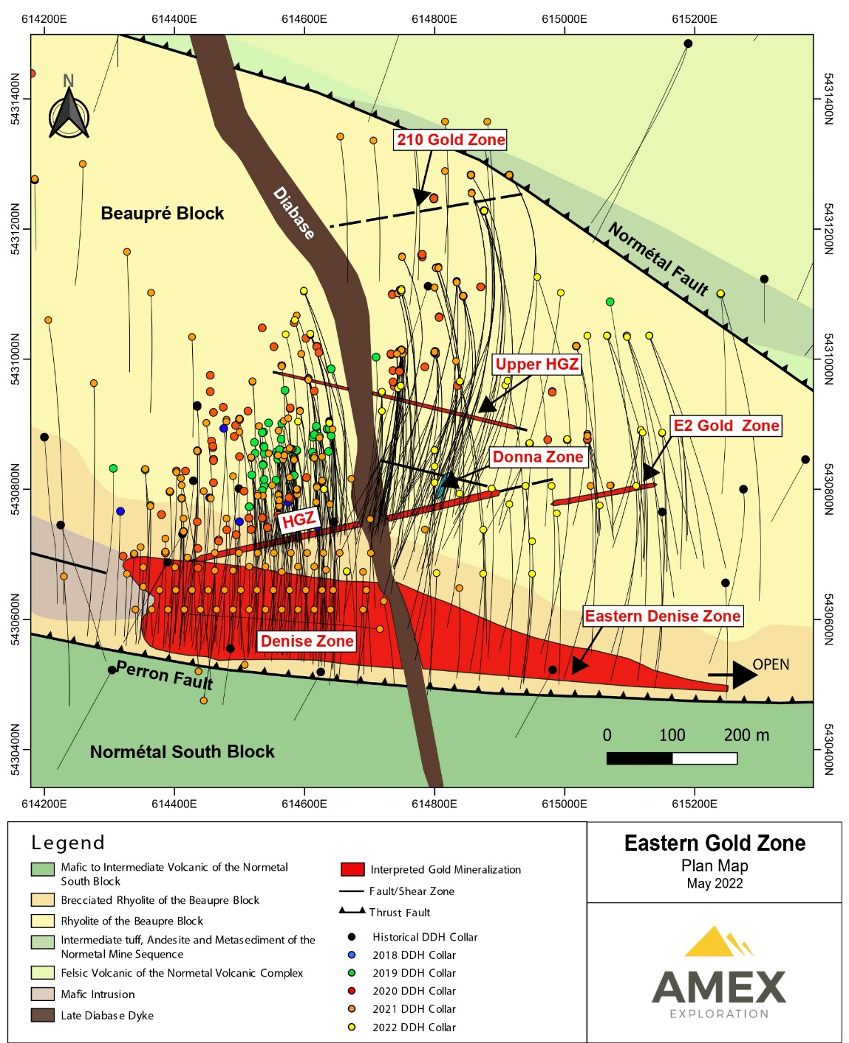 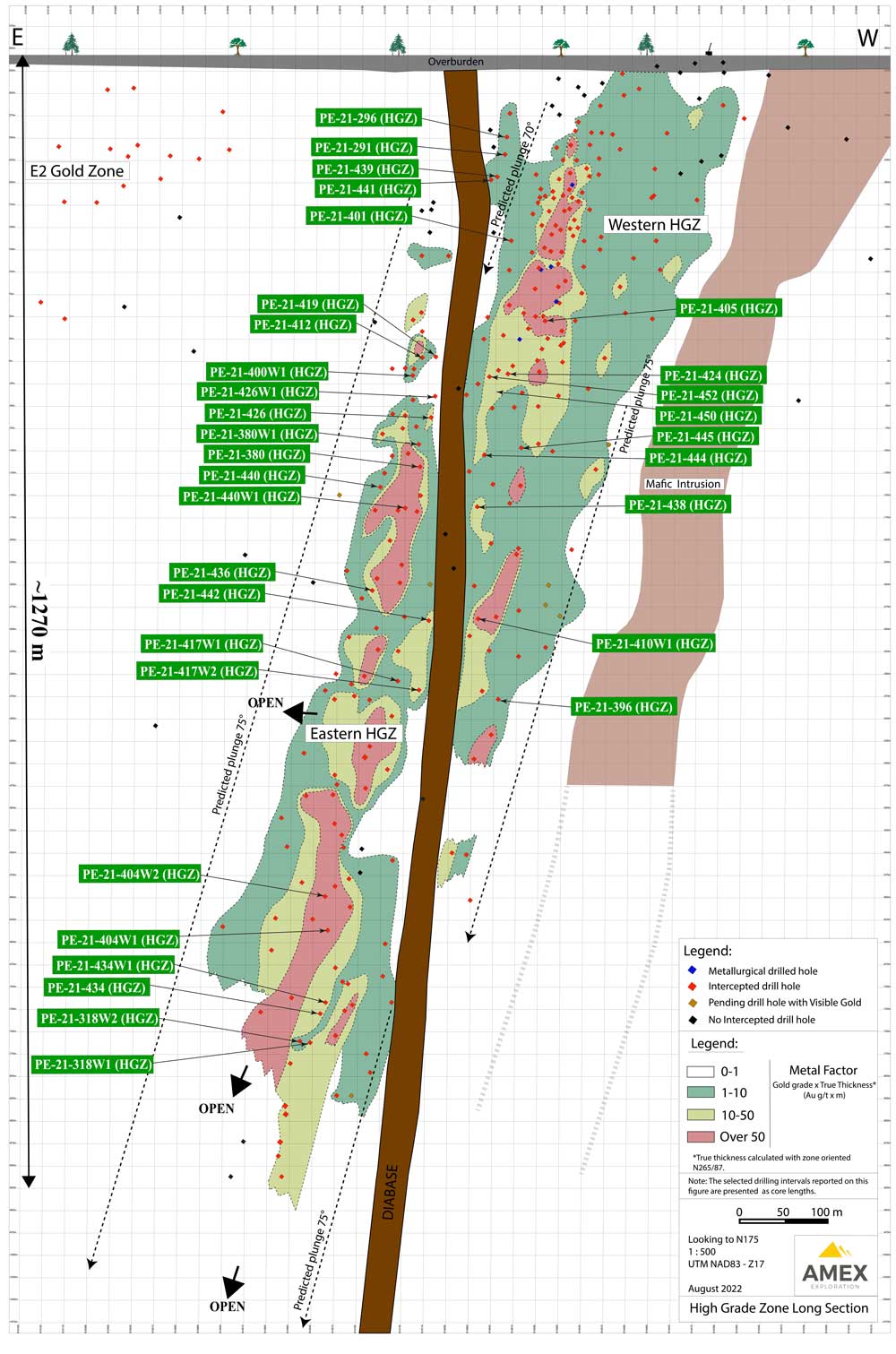 Note: the “metal factor” presented in this figure are calculated using the estimated true thickness.

The High Grade Zone is composed of quartz vein system hosted along the contact of a regionally extensive rhyolite package and a narrow (~1-5m) mafic intrusion. The quartz vein(s) can occur at the upper and/or lower contact of the intrusion. Visible gold mineralization occurs most often in association with sphalerite but also as free gold within quartz or at the margins of pyrite grains. The zone strikes approximately at 265N with a dip at -85 with a slight plunge to the East at 70 to 80 degrees from vertical, in agreement with the local stretching lineation. Mineralization identified to date appears to share similarities with Archean orogenic vein-hosted gold deposits found elsewhere in the Abitibi Greenstone Belt and around the world. The zone has been intersected in the same longitudinal section over a vertical distance of approximately 1,260 metres over varying spaces.

Amex demonstrated the exceptional high-grade gold continuity of EGZ down to a vertical depth of 1.26 km. The Company also reported the highest grade individual assay at Perron of 929.24 g/t Au over 0.50 m at a depth of 290 m in hole PE-21-344.

Highlights from the Deeper High Grade Zone (HGZ East) include:

Highlights from the Shallower High Grade Zone (HGZ West) include:

Note: The HGZ drill results presented above represent core length. True width is estimated to be 55-80% of the reported core length.

The Denise Zone, located 50 to 100 m south and sub-parallel to HGZ, consists of disseminated and quartz vein-hosted gold mineralization hosted within a regionally extensive rhyolite package that lies north of an andesite. Gold mineralization is associated with intense sericite alteration and sulfides including pyrite & sphalerite. Denise is a bulk tonnage target.

To date, the Company intersected at least 750 vertical metres of gold mineralization starting from surface across a strike of more than 1 km. The Denise Gold Zone surpassed expectations showing large zones of broad near-surface gold mineralization and continuity. The geology indicates probability to expand to the east near surface. Highlights from Western Denise include:

Highlights from Eastern Denise include:

Note: the Denise drill results presented above represent core length. True width is estimated to be 60-90% of the reported core length. 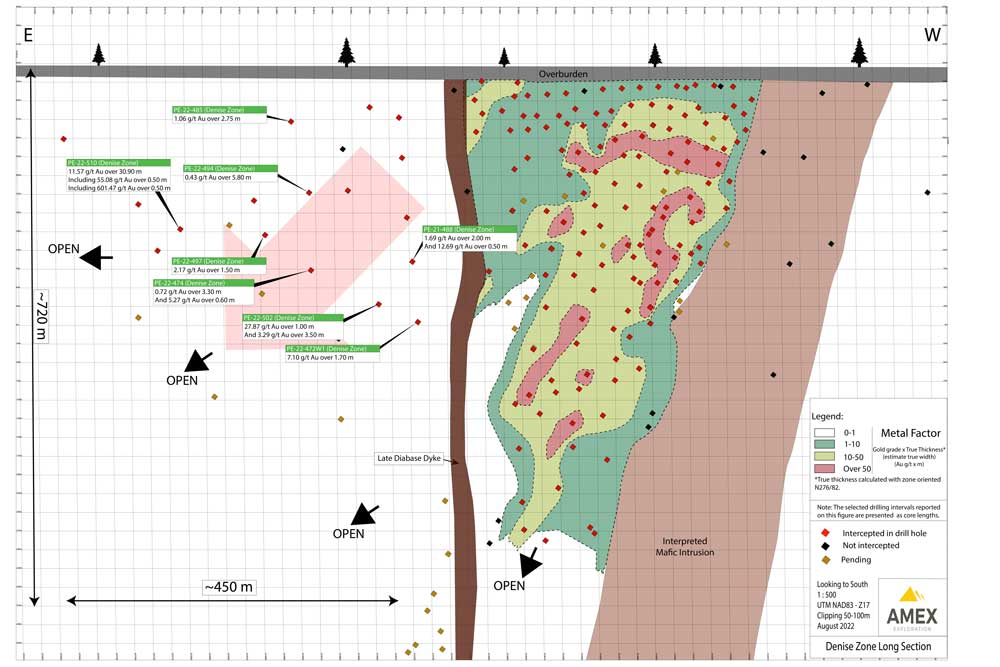 Note: the Denise drill results presented above represent core length and the “metal factor” presented on this figure is calculated using the estimated true thickness.

The E2 Gold zone ("E2") represents one of the most significant new discoveries on the Perron Project since the discovery of the High Grade Zone ("HGZ") in 2018. The E2 zone was discovered by stepping out to the East along the same structure that hosts the bonanza mineralization of the HGZ.

Mineralization identified to date is very similar to the HGZ, with a repetition of a mineralized hanging wall vein, a largely unmineralized narrow mafic sill, and a mineralized footwall vein. Sulfide minerals are also very similar, with sphalerite being the most common sulfide associated with gold mineralization, along with lesser pyrite.

Visible gold has been identified in several drill holes. Of particular importance is the projected plunge of the mineralization.

The E2 Gold Zone has now been expanded down to a vertical depth of 370 m and along strike for 325 m.

Highlights from E2 GOLD ZONE include:

Note: The drill intervals for the E2 zone are presented in core lengths, as its estimated true width is currently unknown. 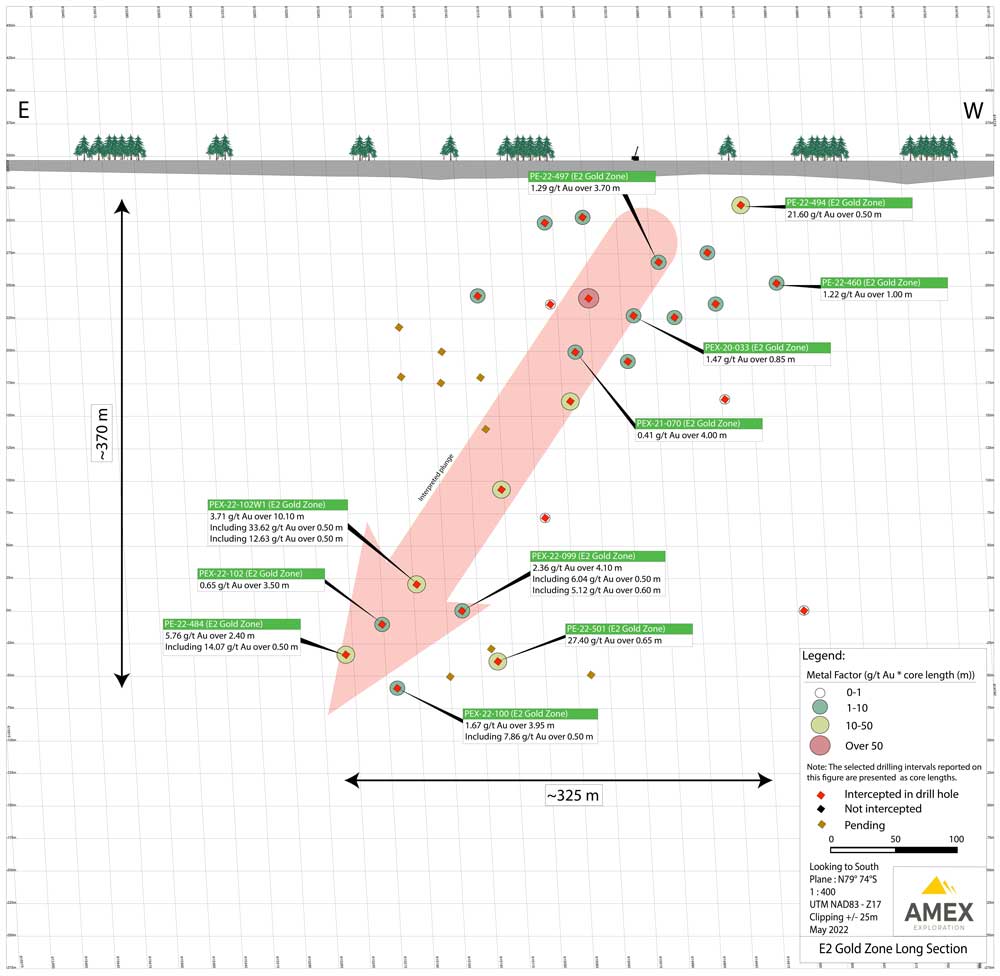 The Upper High Grade Zone ("UHGZ") is situated approximately 200 metres north of the HGZ Of interest is the orientation of the UHGZ, which trends to the West-Northwest, at an angle of approximately 30 degrees away from the orientation of the HGZ. The UHGZ is often hosted by or proximal to a swarm of narrow mafic sills/dikes, and mineralization is associated with quartz veining, pyrrhotite, pyrite, sphalerite, and visible gold mineralization. Owing to its location and proximity to the HGZ, Amex is able to continue testing the UHGZ through its definition and expansion drilling program on the HGZ.

Note: The drill intervals for the UHGZ zone are presented in core lengths, as its estimated true width is currently unknown.

The Gold-Copper Donna Zone ("Donna") discovery occurs immediately north of the HGZ at depth. It was discovered during deep expansion drilling of the HGZ. The mineralization identified, which is similar in each of the three holes reported, consists of highly chlorite-garnet-amphibole altered rhyolite which hosts centimetre-scale stringers of chalcopyrite-pyrrhotite. The correlation between gold and copper is quite strong. Amex has completed a borehole electromagnetic survey on this new discovery and is planning follow-up drilling.

Highlights from gold-copper Donna Zone include:

Note: The drill intervals for the Donna zone are presented in core lengths, as its estimated true width is currently unknown.

The identified mineralization is located approximately 650 m north-east of the HGZ in an area that has seen limited exploration. Conveniently, Amex is able to test the near-surface portion of the 210 zone during deep definition drilling of the HGZ owing to its location. Gold mineralization is hosted within quartz veining in sodic rhyolite of the Beaupre Block.

Highlights from 210 Gold Zone include:

Note: The drill intervals for the 210 zone are presented in core lengths, as its estimated true width is currently unknown.

The Gratien Gold Zone was discovered in the 1990’s by Falconbridge. Amex Exploration (previously Coleraine Resources) optioned the property from Falconbridge in 1996. A number of very significant gold intercepts were discovered, including:

These historical drilling campaigns resulted in the discovery of 5 different zones of mineralization that follow the regional Perron fault horizon.

In June of 2019, the Company initiated a drilling campaign on the Gratien Gold Zone utilizing the same targeting methodology that was applied to identify the bonanza grades at the Eastern Gold Zone. The first hole drilled in 2019, PEG-19-65, intersected 67.52 g/t Au over 1.45 metres and 14.39 g/t Au over 2.05 metres.

The GCZ is about 650 metres from the Gratien Gold Zone and lies in between the Eastern Gold Zone and the Gratien, slightly to the north of the regional Perron Fault. The new GCZ is a near-surface zone that contains high-grade gold mineralization within a broad panel of disseminated gold mineralization with intercepts of up to 26.90 metres grading 3.42 g/t Au including 134.16 g/t Au over 0.50 metres in hole PEG-19-80. The gold grades reported having been found from approximately 14.00 metres below the surface in PEG-19-82 down to a depth of approximately 425 metres in PEG-19-98.

The Grey Cat Zone is hosted in a slightly brecciated rhyolite package and associated with a moderate sericite, silica, and chlorite alteration. Grey Cat’s Gold system is formed by a main quartz vein located along the inferior or superior contact of a mafic intrusion crosscutting the felsic units inside a larger horizon hosting several veinlets or silicified sheared zones. Visible gold is found within veins and veinlets most of the time in association with sphalerite and pyrite. GCZ gold mineralization differs from previously announced gold mineralization at the High Grade Zone and the Gratien Zone in that gold is more widespread through broader panels of the host rock rather than concentrated in individual veins. However, the Grey Cat zone share the characteristic of having a rich vein along the contact of a mafic intrusion crosscutting the rhyolite with the HGZ. The near-surface mineralization of over 20 metres width has the potential to be amenable to open-pit mining methods. Amex has now defined the GCZ from approximately 14 metres below surface down to the depth of approximately 425 metres vertically. The zone is open at depth and along strike.

Note: The Grey Cat drill results presented above represent core length. True width is estimated to be 50-70% of the reported core length 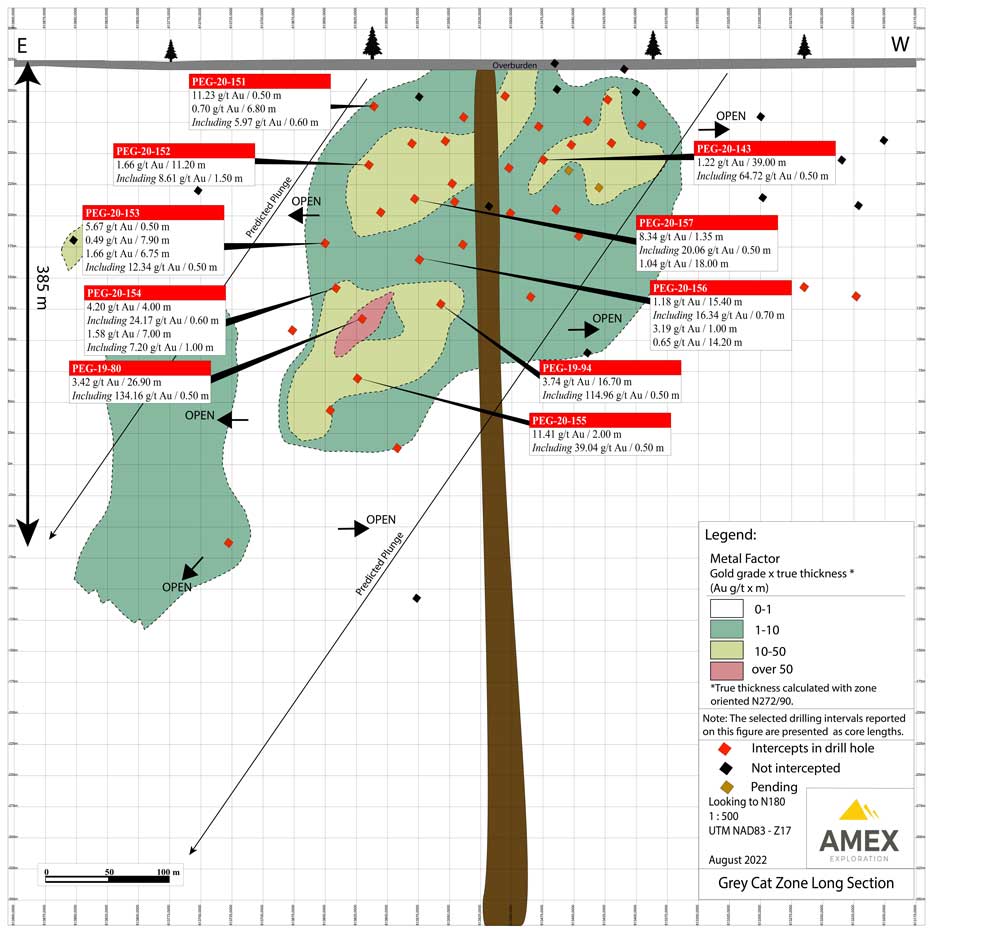 Note: the Grey Cat drill results presented above represent core length and the “metal factor” presented on this figure is calculated using the estimated true thickness.

Note: The drill intervals for the Central Polymetallic zone are presented in core lengths.

Defining and expanding upon this system is part of the 2022 exploration program.

Note: The drill intervals for the QF zone are presented in core lengths. 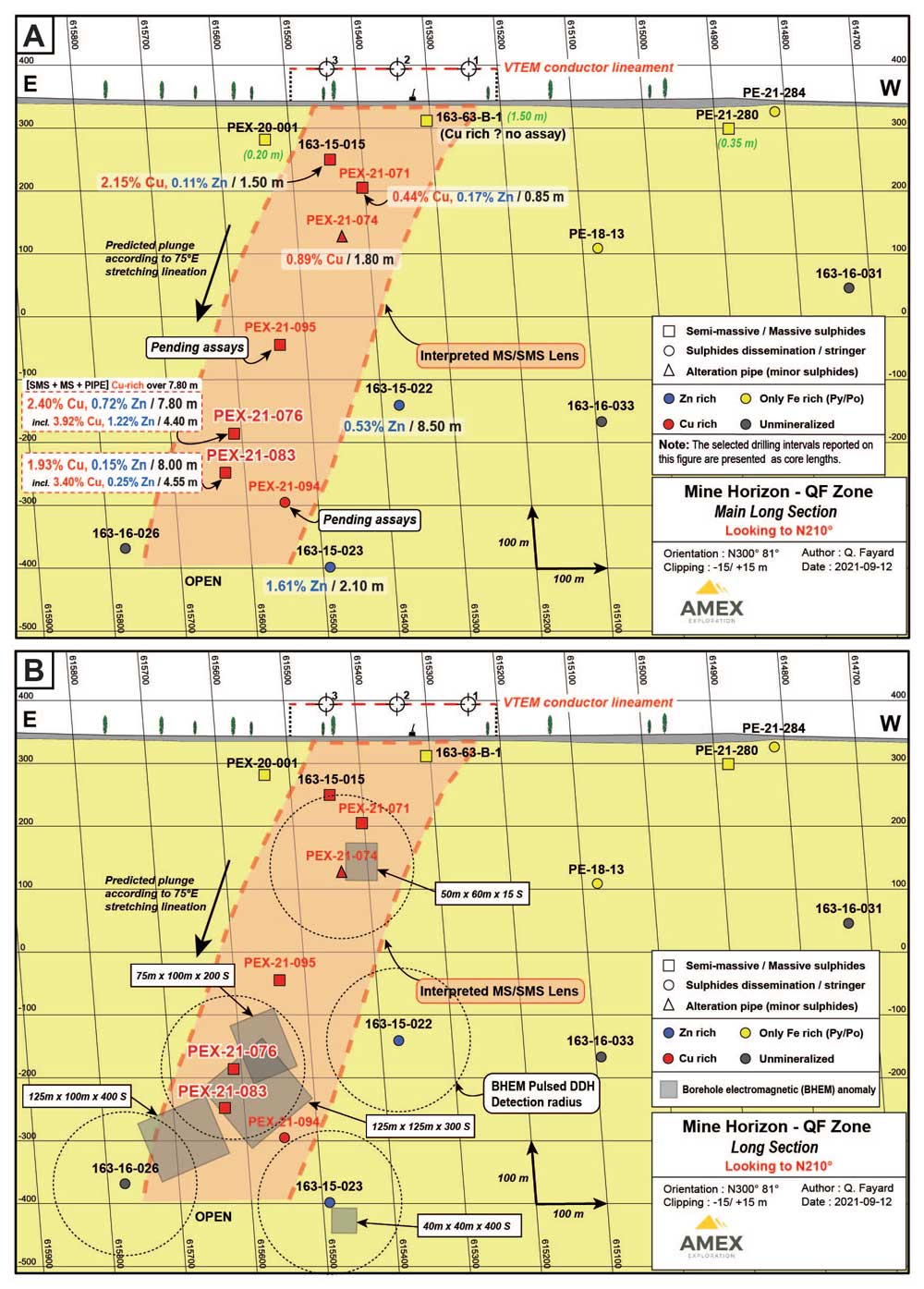 Note: The selected drill intervals indicated on this figure are presented in core lengths.

For all analyses targeting gold mineralization, gold values are estimated by fire assay with finish by atomic absorption. Values over 3 ppm Au are reanalyzed by fire assay with finish by gravimetry by Laboratoire Expert Inc, Rouyn-Noranda. Samples containing visible gold mineralization are analyzed by metallic sieve. For additional quality assurance and quality control, all samples were crushed to 90% less than 2 mm prior to pulverization, in order to homogenize samples which may contain coarse gold.