The Eastmain River properties are situated in the Eeyou Istchee Territory, James Bay, Québec, approximately 350 km north of the town of Chibougamau in the Plan Nord Region. The claims are accessible from Chibougamau by the new 243-kilometer-long all-season road to Stornoway’s Renard Diamond Mine (route 167 extension from Temiscamie). The area witnessed a surge in exploration with the construction of route 167 as it provided road access to an area that was previously underexplored due to limited infrastructure and access.

Today, the Eastmain region host multiple lodging facilities, has near-by power and is being actively explored by a number of companies including Eastmain Resources, Osisko Mining and Soquem. Infrastructure in the area has reduced the costs of exploration programs dramatically. In addition the Quebec Government has introduced a financial exploration incentive program consisting of 38.5% tax refund on hard dollar exploration expenditures. 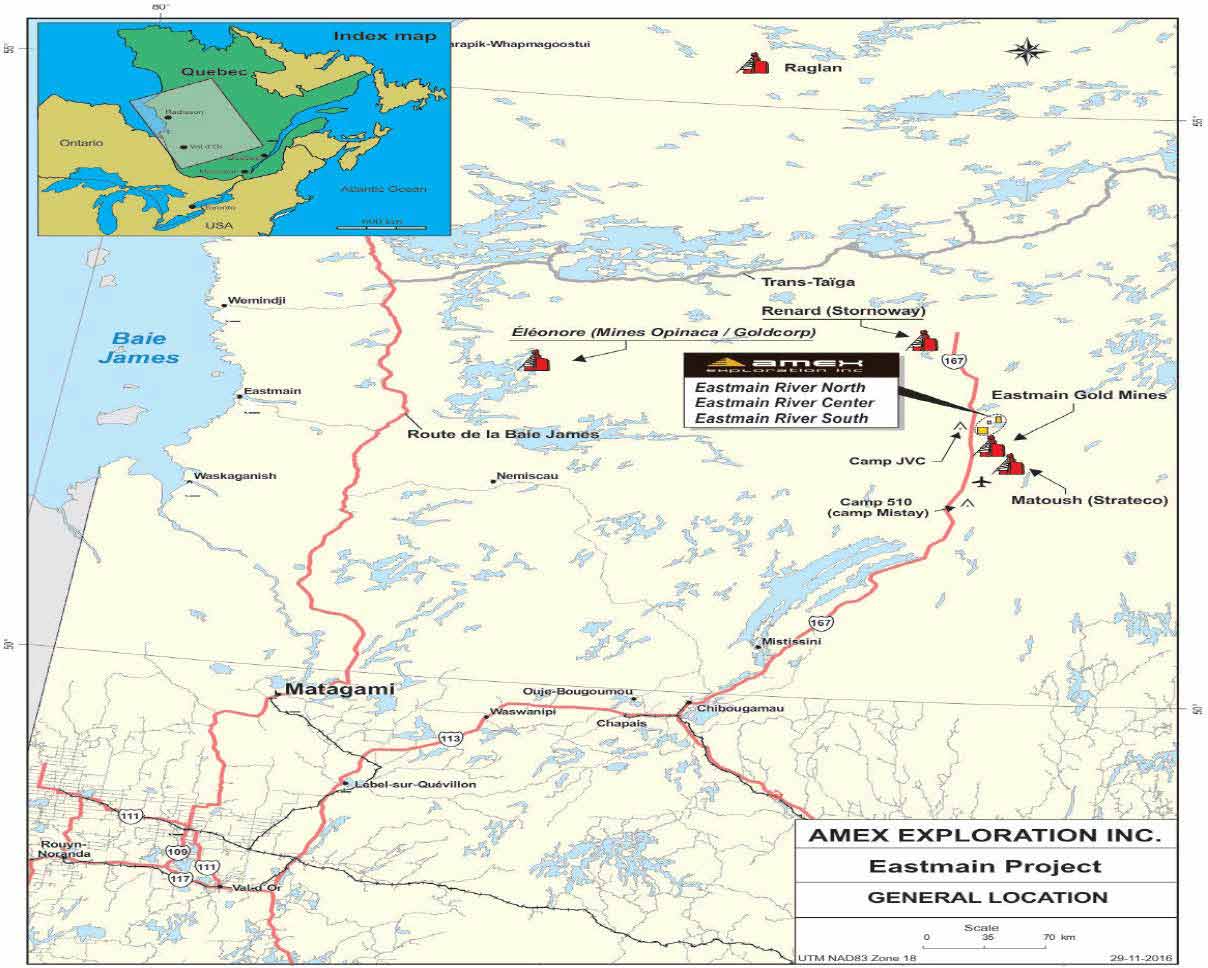 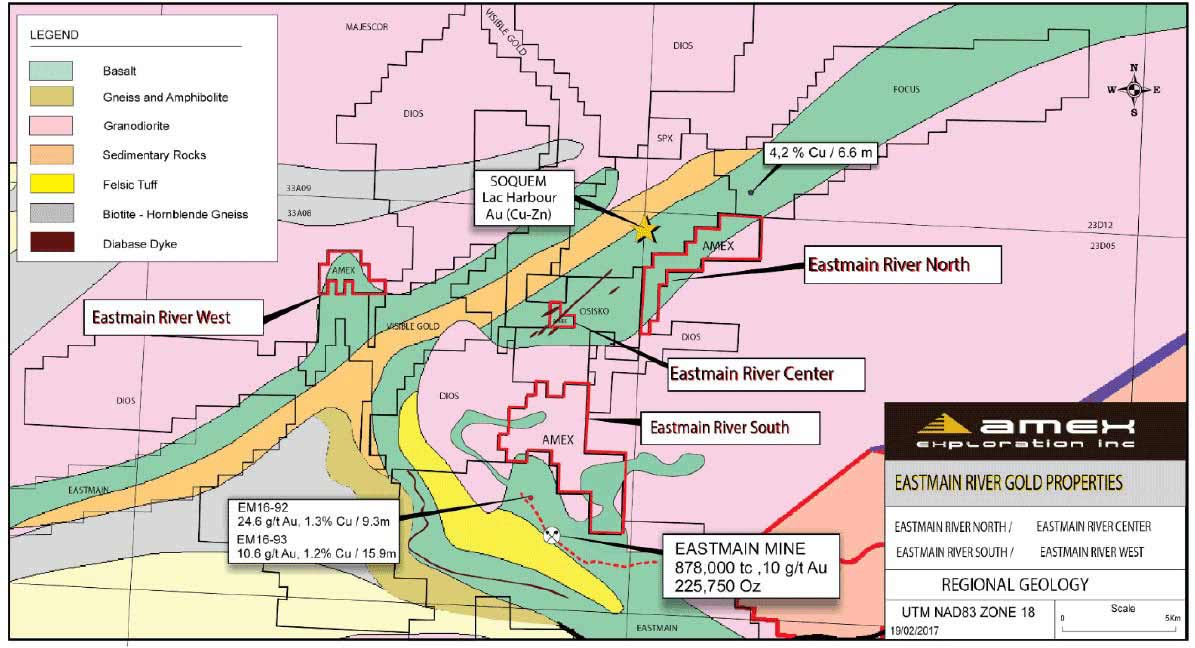 Two survey blocks (Eastmain River North and South) were flown for a total of 468 km for high resolution heliborne magnetic (MAG) and time domain electromagnetic (TDEM) survey. At the Eastmain River North property, the 26 km-IP survey covered an area of 3.8 km by 1 km of the same volcanic assemblage hosting the newly discovered gold and base metals showings of the Soquem’s Lac Harbour property (see SOQUEM website). The airborne geophysical survey conducted in August 2016 clearly demonstrated the continuity of the same magnetic pattern from Soquem to Amex’ ground, pattern characterized by NE-SW alternating horizons of high and low magnetic anomalies. The airborne survey also allowed Amex to identify some crosscutting structures where the magnetic pattern abruptly disappears or is displaced. Nine diamond drill holes totalling 1,266m were completed late April 2017 and core was shipped to the lab for gold and base metal analysis, results due June/July 2017.

With respect to the Eastmain River South property, the 40 km-IP survey will cover the southern part of the claim block which is contiguous to the Eastmain Mine. Geologically speaking, this property is located at the hinge of a major regional fold that affects the entire Eastmain Greenstone Belt. Indeed, the detailed heliborne magnetic survey has delineated a fold feature characterized by a high magnetic anomaly, the nose of the fold is located at the westernmost end of the property. The detailed survey mimics clearly the results of the regional governmental survey, where not only this interpreted fold appears, but also where a larger fold repetition can be interpreted. Of note is that the NW trending limb of this regional feature crosses onto the Eastmain Mine approximately 1.5 km southwest of the NW trending mine horizon. This trend is also underlined by a subtle magnetic anomaly and Eastmain Resources has recently announced some impressive results of the last round of drilling completed at the Julien Target located at the NW extremity of the mineralized trend. Holes EM16-92 returned significant mineralized intersections such as 24.8 g/t Au, 25.7 g/t Ag and 1.1 % Cu over 9.3 metres (see PR Eastmain Resources January 19, 2017).

For all analyses targeting gold mineralization, gold values are estimated by fire assay with finish by atomic absorption. Values over 3 ppm Au are reanalyzed by fire assay with finish by gravimetry by Laboratoire Expert Inc, Rouyn-Noranda. Samples containing visible gold mineralization are analyzed by metallic sieve. For additional quality assurance and quality control, all samples were crushed to 90% less than 2 mm prior to pulverization, in order to homogenize samples which may contain coarse gold.